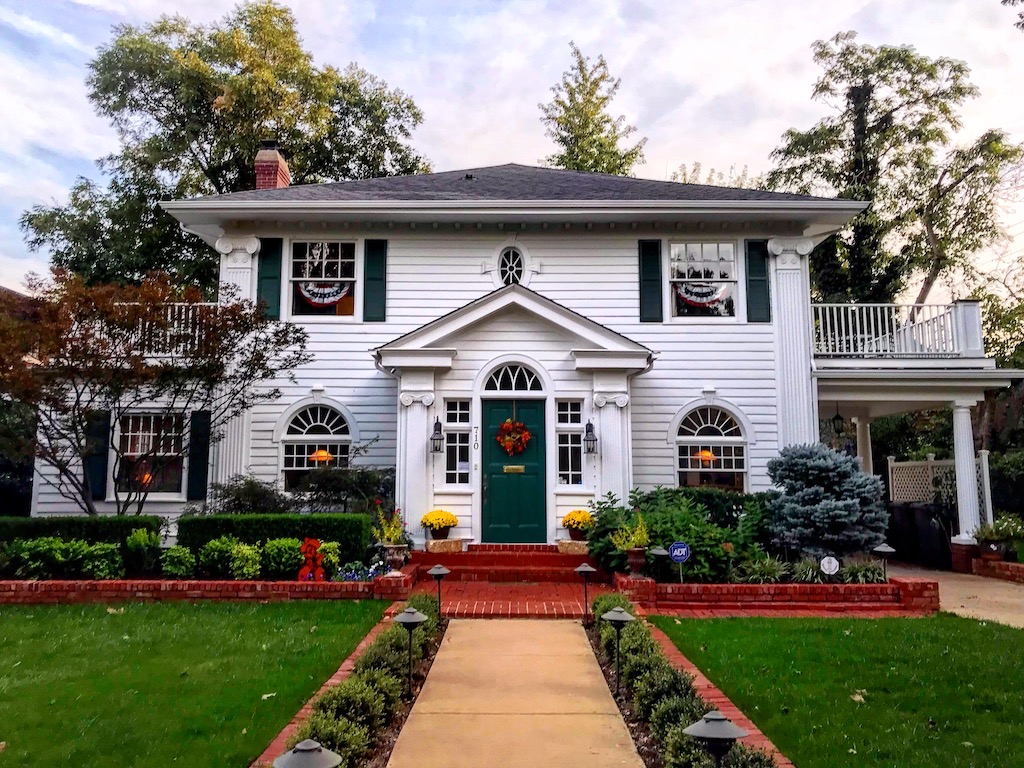 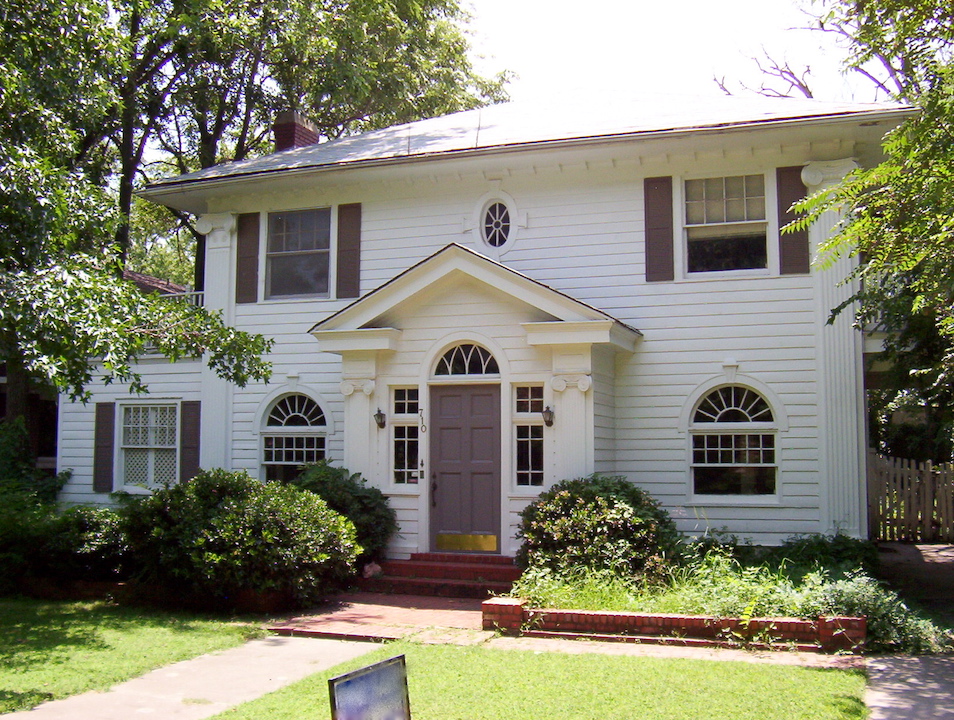 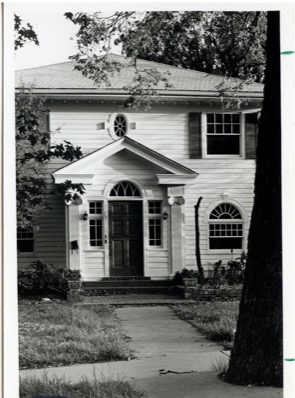 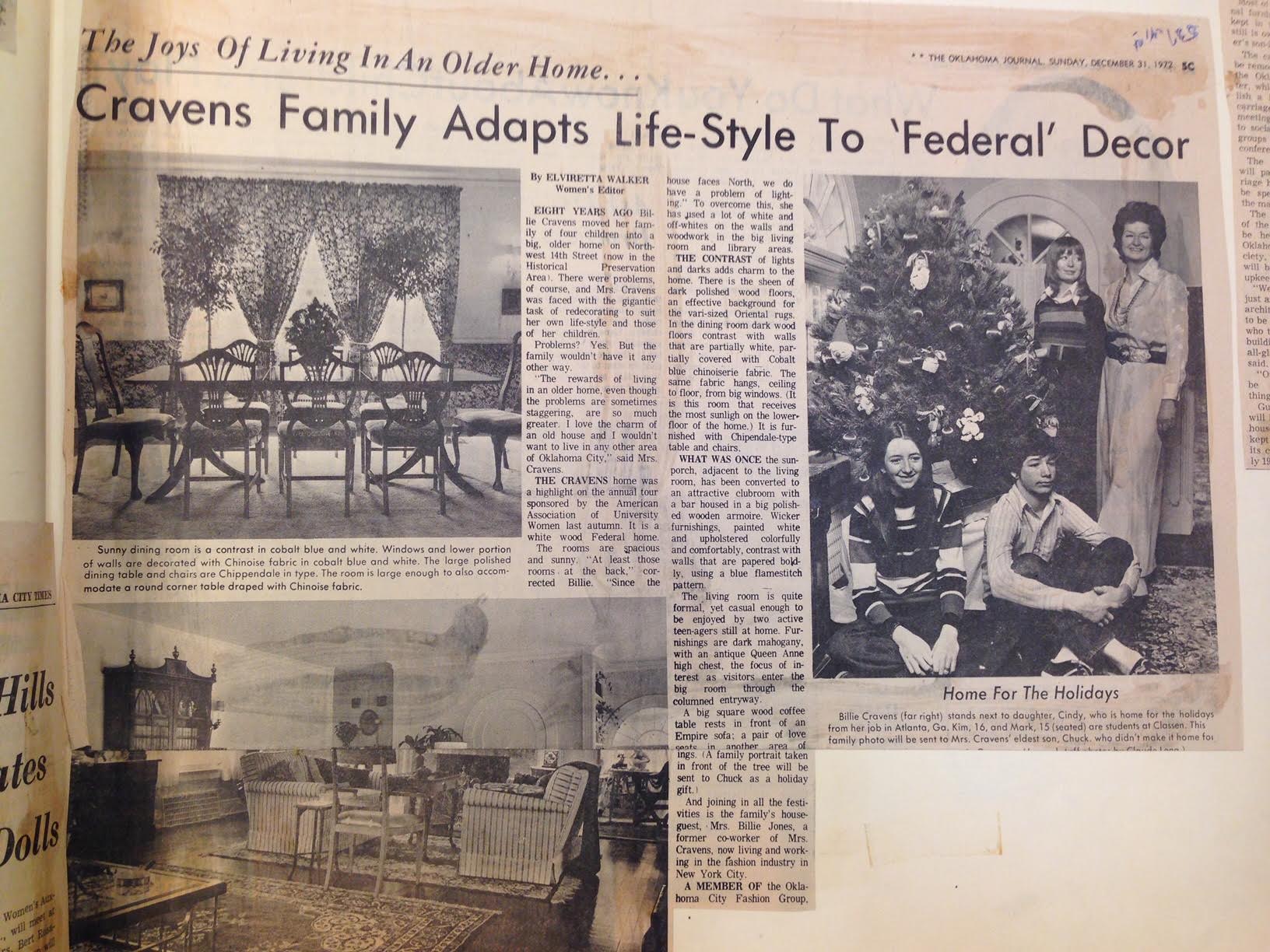 Ernest E. Grimes, a cashier and Vice President of Security National Bank, built this home in 1922. He chose a popular Colonial Revival style with lapboard siding exterior for his home.

The home originally was fronted by a traditional style covered porch. The homes current colonial façade, reminiscent of the Williamsburg style, was created by a previous owner who removed the porch. The façade centers on a dominant portico with pilasters topped by Ionic capitals. These pilasters are repeated at each corner at the front. A fanlight tops the doorway with sidelights, and the tip of the pediment points to the second story oval window above. Fanlights also crown the first story windows along the front. A dentil molding at the eaves accents the hipped roof.

Mr. and Mrs. Michael Rasnier lived in the home in the late 1970s and featured the home on the 1978 Home Tour. The Rasniers added a swimming pool and deck at the back of the house. Additional previous owners include the families of Dr. Sam Moore and Mrs. Billy Cravens.

Kathy L. and John Michael Williams visited the home during the 2007 Centennial Heritage Hills Home tour. As a St. Luke’s United Methodist Church member since he was a boy, John Michael had long admired Heritage Hills, hoping that one day he would live there, with the opportunity to walk to church. This became a reality in 2008 when he and Kathy bought the home from Keith and Heather Paul, of Good Egg Dining, who had rescued it after a seven year vacancy and beautifully restored and modernized it.

From the front entry vestibule, guests enter the living room featuring one of three operable fireplaces in the home and grand piano from the historic Beacon Club, which began its 76 year run atop the First National Center and concluded its place in Oklahoma City’s history in the Oklahoma Tower in 2017. Several Heritage Hills residents served as president of the Beacon Club including John Michael.

To the east of the living room is Kathy’s cozy office, now with a full bath. The formal dining room with adjustable round table and wine cabinet, also from the Beacon club, leads to the kitchen, with recently added cabinets and extra space for holiday cooking.

In 2013 the Williams added a new room, envisioned to be a solarium in winter with a wood-burning fireplace, and a screened in porch in the spring and fall, to include a breakfast area and an office nook for John Michael, all with a view of the downtown skyline. This vision was a masterly carried out by the architects of ADG, with Tom Wilson articulating the owners’ vision; Scott Dedmon and Randy Hill effectuating design. Betsy Brunsteter delicately handled each aspect of historical preservation and authenticity essential for a Heritage Hills home, from approving design, selection of historically true building materials, and approval of the Certificate of Appropriateness by the City’s Historical Preservation Commission, all with the careful eye of a skilled historical preservation architect. Kathy and John Michael graciously opened their home for the 2018 Home Tour and have served as Tour Chairs for the 2019 and 2020 Tours.