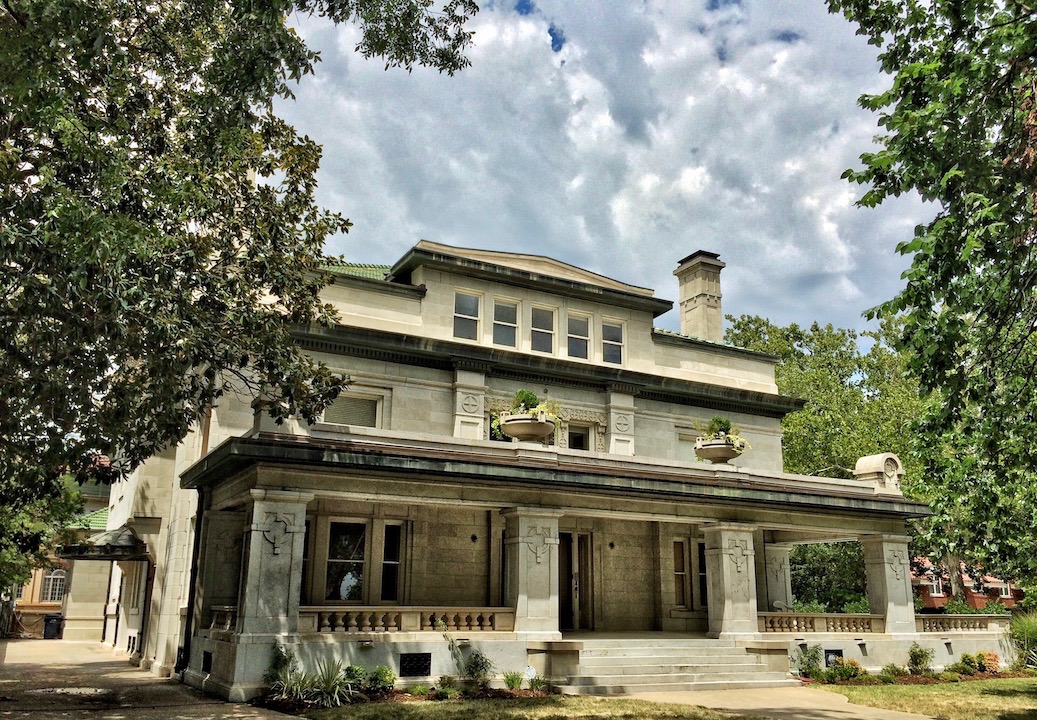 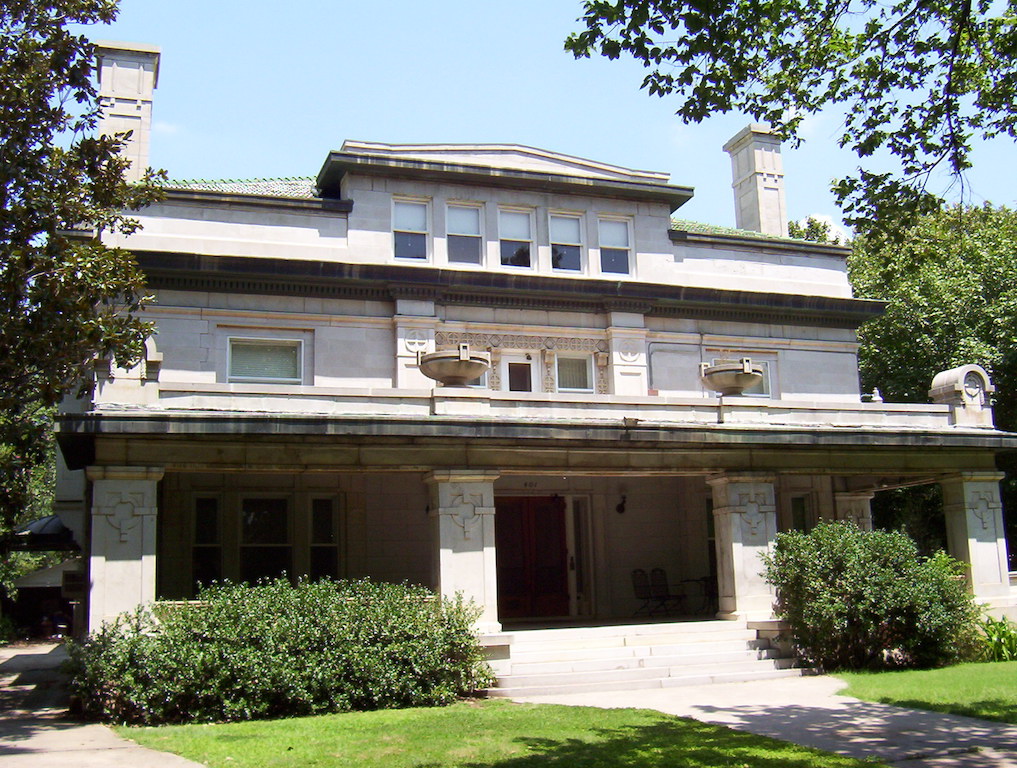 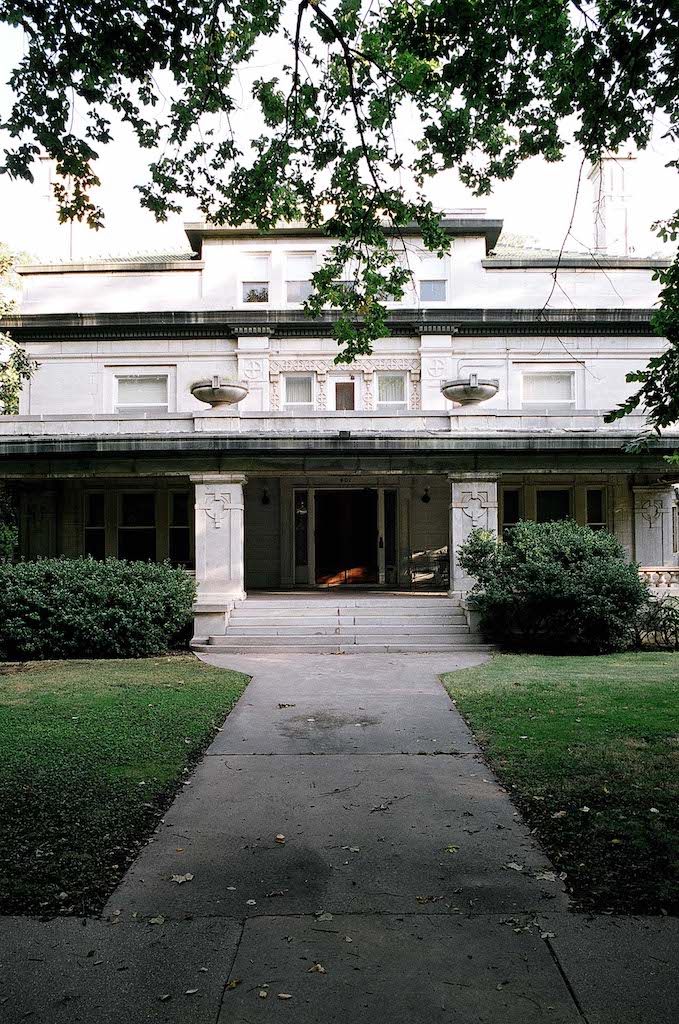 This Georgian style home was built in 1910 by Elizabeth and Charles “C.B.” Ames.

A native of Mississippi, Charles moved to Oklahoma City in 1899 and quickly built a reputation in politics and business. With his law partner Dennis T. Flynn, he served on several territorial and congressional committees, and wrote the platform of the 1900 Territorial Democratic Convention committing it to joint statehood for the Twin Territories. In 1906 he served on the statehood delegation to Washington. When Oklahoma was admitted to the Union as the 46th state, he became a presiding judge on the Supreme Court Commission. In business, he helped organize the Oklahoma Gas and Electric Company, which he ultimately served as president. He also invested in real estate and oil and practiced law.

In 1901 Charles and Elizabeth bought lots 11 and 12 on block 8 of the Classen Highland Parked Addition and built a two-story frame home on lot 12. In May 1910, having outgrown the home, they moved it to 305 NW 14th and engaged the architectural firm of Layton, Wemyss-Smith, and Hawk to design a new home. The architects had already gained fame for their designs of the Skirvin Hotel and Central High School, and Layton would go on to design the State Capitol, the Historical Building, and a host of other monumental structures.

For this home they used many elements from the Chicago area Farson House designed by architect George W. Maher, a leader in the Prairie style movement. They hired the Oklahoma City Construction Company as general contractors, whose president was Mr. D.H. Shenk. Work began on the 13,800 square-foot mansion in October of 1910 and was completed one year later. Ten years later, Solomon Layton used the same floor plan and architectural style for the Governor’s Mansion.

Structurally, the home is still one of the most solidly constructed buildings in the Southwest. The outside walls and foundation are 17 inches thick, of poured concrete, as are all floors and most of the interior walls. All are fortified with steel re-inforcing rods of closely specified dimensions and elastic limits. All concrete floors are 10 inches thick with wood floors placed on the concrete with 2“ x 3“ bevel sleepers on 16” centers. Spaces were filled with graded screened cinders firmly packed. The wood floors on the first floor are oak; the second and third floors are maple. There is a central circular stairway to the third-floor with a large Hurricane lamp fixture hanging from the ceiling. There is a large ballroom that occupies just under 2000 square feet.

The exterior, faced in Bedford limestone, is Georgian. A hipped roof with a parapeted edge tops off the three-story structure. The first floor facade is arranged in three bays with massive, decorated stone columns. At the second floor, a door centers symmetrical windows in broad pedestal urns at the railing of the upper porch. A through-the-cornice dormer with five windows, is centered on the third floor facade.

The roof is green glazed Ludowici Celadon tile, laid over metal sheeting. Gutters in hand-tooled copper cornice extend entirely around the top of the home, wide and strong enough to walk on and carry several hundred pounds of weight. The house has more than 100 windows.

During World War I, Charles served as the Federal Food Administrator for Oklahoma, then was named an Assistant Attorney General in the Woodrow Wilson administration, a position he used to prosecute the successful anti-trust suit against U.S. Steel. He also became General Counsel for the Texas Oil Company, Texaco, then a director and chairman of the board.

The Ames family lived in the home until Elizabeth’s death in July 1948. The house was  unoccupied for one year, then was purchased from the estate by Dr. Joe Henry and Sarah Coley, who retained the home‘s excellent condition.

Dr. Coley, a native of Alabama, was born in 1907. He moved to Oklahoma City as a child with his parents during the economic boom in 1909. Living in the family home at 13th and Robinson, he attended McKinley Grade School and Central High School, then enrolled at the University of Oklahoma and completed his A.B. degree at Oklahoma City University in 1930. He entered Jefferson Medical College of Philadelphia and graduated in 1934. In 1971 his medical college elected him to the board of trustees, a position he held for seven years. He was appointed national chairman of the Sesquicentennial Drive and was honored with the degree of Doctor of Science in 1980 and was the recipient of the Alumni Achievement Award in 1982.

Sarah Billups was born in Cordell in 1915. Sarah and Joe had four children, Charles, Carol, Sarah, and Nan. Sarah lived in the home until her death in 1980 at age 65. In July 1982 Joe was joined in marriage to Ruth Swihart Fullerton, the daughter of Dr. and Mrs. S.S. Swihart. Dr. Swihart was one of the first dentists in Oklahoma City. Joe died in October of 2006. At that time the only change to the home in three quarters of a century had been the retiling of the front porch.

The current owners are only the third owners of the home. They purchased the home from the estate of Dr. Joe Henry Coley.

An entry with original tile floor connects to the green foyer with its unique crown moldings. Pocket doors on the left side of the foyer lead into the parlor. The walls have original finishes. Opposite the parlor is the library with a fireplace of Indiana limestone and original light fixtures. The dining room has fabric panels on its walls and opens on the east to the enclosed sunroom with original floor tiles. This room was originally an arbor. The former butler’s pantry with its original cabinets, sink, and icebox connects the dining room with the kitchen.

At the north end of the foyer a generous stairway circles in a wide, open arc through the second floor and all the way to the double pocket door entry to the third-floor ballroom. Original wall sconces beginning on the first floor continue up the stairway and match the centered hurricane light hanging from the third floor. Windows at the landings provide light for the stair.

The home’s basement is the same size as the upper floors. The original boiler furnace is still there along with a large laundry room, bath, and several rooms used for storage. The basement stair is on the same arc as the stairway to the upper floors.